Gil Adamson's Ridgerunner (Anansi 2020) is a sequel to the author's previous book The Outlander, published ten years before and winner of the International Association of Crime Writers' 2007 Hammett Prize. The 2020 book has been shortlisted for this year's Writer's Trust Fiction Prize as well as the Giller. 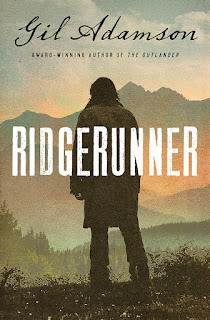 It is a western of sorts. I like film westerns--my favourite is High Noon--and I am still devoted to the TV series Deadwood. I have read very few prose westerns, however, so my literary comparisons for this book derive from other genres. I see affinities with nineteenth century romance and gothic literature of the Old and the New World. The Americans Jack London and Nathaniel Hawthorne come to mind, as does the European gothic of Ann Radcliffe and Walter Scott. Scottish and French names, the sudden dangers of the forest, mysterious cabins in the woods, coincidental meetings, and cold-hearted villains remind me of Scott. The tastes, sights and smells are Canadian, however: the looming Rocky Mountains, the wind-stiffened prairies of southern Alberta, Nakoda-speaker trappers, Winchester rifles, and interminable snow and cold. The time is firmly the early twentieth century, for railroads bring Edwardian tourists to the rough roads of Banff, automobiles loiter in the newly renamed Lake Louise, and the First World War has brought internment camps to the Rocky Mountains Park.

I admired most the details in depicting this world, especially those related to the routine of survival of the people who live alone in the forest. No horse is saddled and no foot pushed into a boot without  minute attention. Some readers may balk at the slow pace that results, but the writer's self-assurance in representation filled me with confidence that the novel's events transpired at the rate that they ought to to accomplish the necessary work of its particular mode of storytelling. Some knowledge imbedded in The Outlander might have helped me understand where the "ridgerunner" William Moreland and his wife Mary Boulton had come from so that I could better understand where they were now and how this past affected their adolescent son Jack, who spends much of the novel on the run from his sinister guardian Sister Beatrice. Since I took pleasure mostly in the texture of the setting, I didn't begrudge the lack of context, since I had enough familiarity with gothic adventure to know what the stakes likely were--the tender souls of the good versus the devoring hatred of the evil.

I was surprised that this kind of book made it into the long list of the Giller, never mind the short-list. Itis old-fashioned in many respects. Can it win?

I am terrible at guessing winners of any prize: chances are the book I liked the least will win. All the nominees are good. I liked How to Pronounce Knife the best, but all five nominees are readable and worthy of a reader's time.