Genre theory informed my dissertation on nineteenth-century American literature (civil war literature to be precise). The course I am teaching on academic writing has a textbook that uses genre theory to explain how to write for post-secondary institutions. I will say more in future. This is a warm-up of sorts to introduce the idea of genre, which I am adding to my repertoire of subjects for this blog.
Posted by Vivian at 09:36 No comments:

Freewriting is a way to record one's thoughts as they occur. Rather than letting one's inner editor interfere with one's writing (something writers often do), freewriting disallows editorial intervention in oneself.

For my purposes here, free writing is not literary stream of consciousness. It is actual stream-of-consciousness writing (as close as one can come to recording one's own thoughts in words, which I realize is an imperfect art).

I recommend using a pen and paper rather than a keyboard, for keyboards make deleting text tempting, and frequent typos will make one's inner editor wake up screaming from its slumber. In freewriting, one cannot go back and change anything: spelling errors, weird words, embarrassing thoughts, nonstandard grammar, improper punctuation must all remain. Just keep writing, without stopping or going back to change things, for at least 15 minutes.

Pure freewriting has no topic at all. The results can be weird and disturbing, but pure writing is useful for unblocking yourself or working on a problem that you are not sure you have or when you are not sure what the problem is. 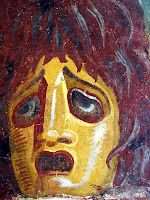 The word mimesis (imitation, representation) has remained in currency mostly due to Aristotle. He and Plato are influential early philosophers of art in the Western tradition. They did not always have good things to say about representation (by "they" I really mean "Plato''); nonetheless, their ideas still circulate. I am not an expert in either of them. Read them for yourself or look at secondary sources about them.

Aristotle's significant discussion of art is in his Poetics. For Aristotle (and people of the classical Greek period), verse (poetry) was the mode for artistic composition, so that in Poetics Aristotle also discusses drama (which the Greeks wrote in verse). Aristotle made famous the idea of catharsis, the idea that representation has a positive psychological effect on the individual viewer of drama, purging negative energies, so to speak, from the audience, and creating beneficial energies and thus doing an overall cultural good. Aristotle speaks of catharsis in tragedy (a type of drama, remember, not just "sad events"), but people today use the term in a more general sense, even applying it to gaming.

Plato also discusses mimesis, though Aristotle tends to be more systematic than his teacher Plato, who framed his philosophical views in the form of discussions (actual or not) between Plato's teacher Socrates and Socrates's followers.  Plato most famously discusses mimesis in The Republic. Plato did not think mimesis was a positive force; instead, he thought mimesis, as a copy of the real, was a degradation of the real, itself a degradation of the ideal, and Plato took the ideal very seriously. In The Republic (Book X) Plato recommends (with the slightest of regrets) that all poets be banished from the polity--that's how seriously he took the ideal.

Aristotle is more of the artist's philosopher than Plato. Still, some people who do not like art will use an argument similar to Plato's. The idea, for example, that fiction is lies and nonfiction is truth (or "real") is basically Plato's argument.  Know the enemy.