I have some creativity tools I want to share. They may be relevant most to narrative arts, fiction writing specifically, but I think they could be adapted for other creative processes. 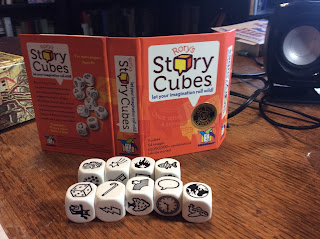 1. Rory's Story Cubes have images on their six sides. Roll the dice and create a story based on those dice. I have a generic set, but thematic Story Cubes exist as well. These include Doctor Who, Batman, space, and animal cubes.

I have used them when I am completely stuck. They are also a way to start a story when I
need one but have no ideas.

Below is an example of a paragraph of story I generated. I forced myself to use the images from all nine dice.

The images were a bridge, a falling star, a flame, a fish, one die, a cane, a rainbow, a dialogue bubble, and the Earth:


Cane hadn't known a falling star was coming that night, but there it was, sliding down the night sky in front of him and the bridge he was fishing on. Just as the falling star slipped down below the treetops beside the old Die farm, his line jerked. He leaned over the bridge's pedestrian railing and saw a flash below him in the water. The flash widened. The light was beaming down from above, a hot pink light The light made a roar. In the light he saw a fish in the water. He said out loud,  "Rainbow trout," and then the bridge shuddered beneath him The tremours threw him forward against the railing, and the rod slipped out of his hands into the creek. The earth rumbled. Ahead, flames raced up from the trees and met the roof of the night.

I have been listening to Marc Maron's podcast WTF this summer. The Atlantic gives a charming account of Maron as an American Ancient Mariner. Indeed, he is someone who cannot stop talking about himself, and, in so doing, compels others to both listen to him and become a version of him.

WTF has been around long enough for people to compile best-of lists. One of the podcasts that appear on many best-of lists is the second part of his special 500th podcast with comedian Louis CK.  This episode contains CK's account of the creation of his webseries Horace and Pete. Maron gives CK free rein to describe the entire creative process behind the creation of CK's webseries.

Listening to this account gave me a view of what it is like to put together a project that has no precedents. Louis CK is not an unknown person, and as he admits, he was able to use his fame and his past success to help him fund and produce his project. To hear CK talk about the project, money (it was his money) was not an issue for him. Instead, what CK wanted to do was to allow himself to be creative and then allow himself to work towards getting his creative ideas to an audience.

CK talks about everything in the production of this podcast. For those who aren't interested in behind-the-scene details, this is not the podcast to turn to. But for those who want to hear the details of how someone gets an original project off the ground, from writing to casting to marketing, this should prove a useful case study.