The Glass Hotel feels like a remake of Emily St. John Mandel's previous novel Station Eleven (2014), with the pandemic of the latter book replaced by the 2008 financial crisis as represented by a Bernie Madoff-style Ponzi scheme. A seemingly significant difference is that Station Eleven is speculative fiction, whereas The Glass Hotel lies in the realm of the literary mainstream.

No matter how much I tried, though, and I tried, I couldn't ignore the doubling between the two books. I can't say too much without revealing their plots, but I will say this. The Glass Hotel contains two characters from the previous book: shipping company executives Leon and Miranda, the latter who is arguably the main character of Station Eleven. Leon gets more attention in the 2019 version as one of the people who suffers complete ruin at the hands of the novel's Madoff stand-in, Jonathan Alkaitis. Another character fills the role that Miranda plays in Station Eleven. Like her, Vincent Smith (named by her parents after Edna St. Vincent Millay) lucks herself into a luxurious life by virtue of her mismatched relationship with a wealthy man (Alkaitis), yet she feels "adrift" and "unmoored," two words that are key in characterizing the emotional states of many characters in both books, in the cocoon of this life.  Miranda funnells her passion into her graphic novel and into the isolation of the title's enwombing retreat for her fictional alter ego Dr. Eleven. For her part, Vincent takes five-minutes videos of the natural world, especially of the ocean of her childhood home of the coast of British Columbia and of the oceans she travels to as the trophy wife of Alkaitis. Standing in for Station Eleven is the Hotel Caiette, the hotel of glass that brings the major players of the plot together. Hotel Caiette constitutes another fragile place of stillness in the wilderness, but it also stands in for all the glass-bound towers that Vincent finds herself in as Alkaitis's fake trophy wife.

In addition to these plot and character parallels are a similar structure and theme. For both novels, Mandel writes in fragments, and the changes in space and time between adjacent fragments often are marked by continents and decades. Her many characters cross paths, and in those crossings the books emphasize the interconnectedness of things and the ineffability of experienced time. The storytelling in The Glass Hotel is not chronologically straightforward, that is; but Mandel nevertheless has enough control of her material that I never got lost. Each character who is connected to Vincent and Alkaitis has a unique enough personality and narrative circumstance that confusing is difficult. The result of these well-controlled fragments is a narrative that drifts forwards and backwards in time while simultaneously revealing details that, once put in chronological order, depict a melancholic planet full of people whose sufferings are rarely inflected by any of the good things that happen to them. For Mandel's characters, decisions tend to lead to bad outcomes, but no character seems surprised by that downturn; or if a character is surprised, as Leon and his wife seem to be at first, they come to love the freedom that their ill fortunes have brought them. I am not sure of this doubling is conscious or not; I suspect it is, though why I am not sure.

When I say that the two books feel similar, I mean the emotion of melancholy possessed by characters who cannot escape their pasts and the sense of disorientation generated by the books' fragmented structure. When I read both books I had this same feeling. One emotion that the newest book lacks is Station Eleven's thriller elements in the post-pandemic world, but I did not believe that aspect of the earlier book. It seemed much too similar to elements of other postapocalyptic stories, such as the crazed warlord who with his murderous cult threatens the possibility of humans to resurrect their demolished civilizations. 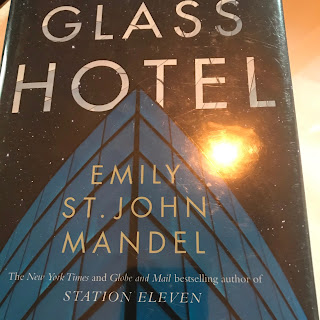 Now that I have read three books, I can start to make comparisons. Lynn Coady's Watching You Without Me is stylistically and narratively much different from Mandel's book and requires some effort in comparing the two. By contast, Seth's Clyde Fans, however, resembles Mandel's novel in its focus on  how the past affects the present and with a similar melancholy.

At this point, I prefer Clyde Fans because of its greater philosophical intensity and closer examination of its fewer characters. But I have eleven more books to read, so I can't say more than this until I get through more, if not all, of them.